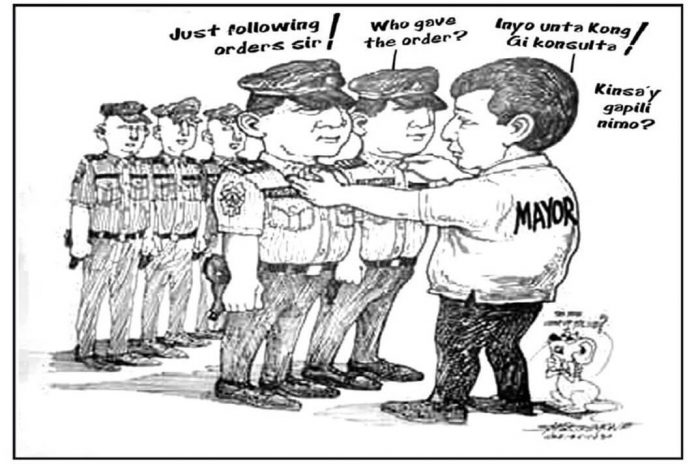 DUMAGUETE CITY – Unless there is clear convincing and incontrovertible reason that politics is behind the relief of city chief of police Police Superintendent Jovy ‘Atanacio, then Mayor Remollo has to first contend the much accepted dictum of “ presumption of regularity. ”

But if, at all, there was NO regularity in the process because precisely it was in violation of the PNP rules, in that the mayor’s approval of the new replacement PSupt Jonathan Pineda from Kabankalan, was never solicited. As if by design that Atanacio was on leave that the replacement suddenly reported for duty. Is that “regularity?” Certainly not.

Mayor Remollo has every reason to react adversely although he took the new chief cop with grace with the caveat that if he mis-performs, then the City government has every reason to exert that the city leadership has to give his imprimatur prior to assumption of the next replacement.

The City Council was more reactive. They threatened to withhold P5Million in city’s police assistance in their budget next year unless they will follow the rules and procedures in replacing chiefs of police. Indeed the names of Santos, Badon, and Pineda were floated but never was the Mayor’s approval or choice sought.

Moreover, the council’s proposed increase of police allowance from P600 to P1500 a month might also be withheld if this fiasco is not clarified.

Well, both City and Police and People will stand to lose if nobody gives in. Mayor Remollo took the road less traveled, accepted Pineda, and told the people that Pineda was rammed into our throats. Like gentle people that we are , Dumagueteños accepted him with grace, but along with it, the caveat mentioned above.

For business solutions and growth opportunities, contact our partner Ako Philippines – they are offering website services, creative graphics and branding solutions, it & automation and business consulting.