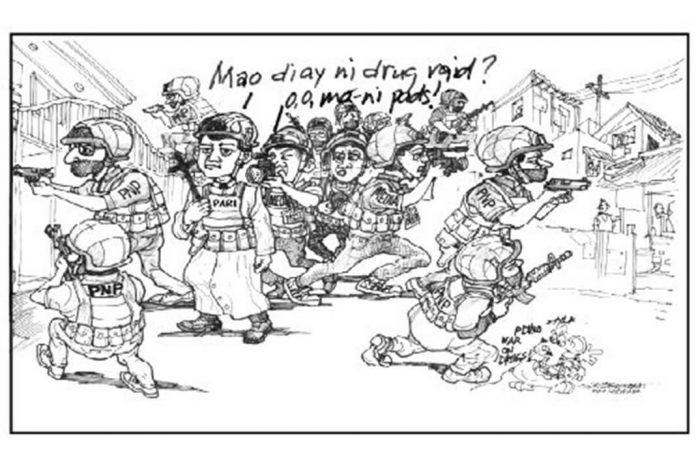 Wednesday’s order of President Duterte for the PNP to allow if not require that journalists accompany the police in all drug raids of the journalists’ choice is a welcome gesture of transparency by government in its worldwide controversial war on drugs which are highlighted by 2,261 summary killings on police record.

To make this viable, let the invitation be raised and let media and Church respond appropriately. In Dumaguete, local media men have long been invited by PNP to witness drug raids.

If we may add, the Church may assign a representative (perhaps any member- volunteer of the religious renewal movements ) who should also accompany drug raids so that due process be assured and that there will be no more accusation of summary killings. Yes, of course, if they resist and endanger the lives of the raiders they have to use appropriate —repeat appropriate — and not excessive force to quell the danger — maim but not necessarily kill.

If media can accompany soldiers in covering the Marawi war, why not on drug raids? Today, it is even required thru the LGUs that media witness drug raids. It should continue as a policy.

Why is it that when drug personalities are killed there are no witnesses? In some raids, when media men are present, there is no killing. Why is that? Local Media raid-witnesses usually included names like Choy, Porboy, Niel, Edmund, Anthony, etc. Let them be witnesses thus become deterrents to drug raid killings . If done nationwide, this will solve Duterte’s and Bato’s “tear- filled” dilemma. Government nationwide can tap the KBP or local press clubs, and or the NUJP National Union of Journalists or Rappler.

A challenge to the Church/ and Dioceses: End your vocal critics against extrajudicial killings by assigning a Church representative to witness drug raids in full coordination and protection by the police.

If the people are SINCERE in helping the police end the drug menace, then media and Church should accede to the call by the President to witness drug raids and see if EJKs will end.