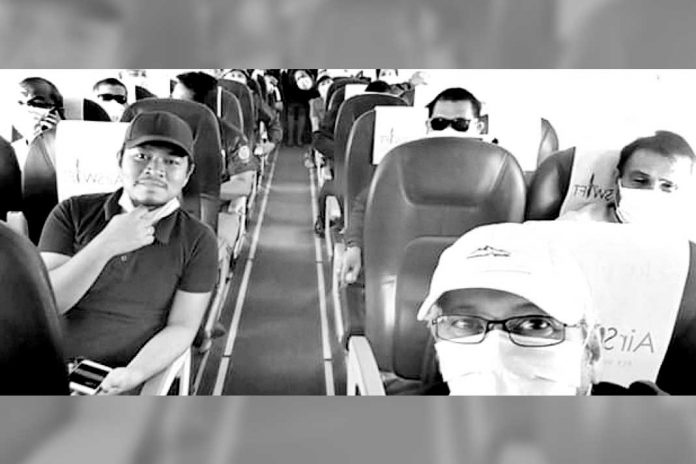 One of the toughest challenges one can experience during this COVID-19 pandemic is having to be stranded and locked down in a distant province away from home. This was the situation that more than 150 employees and contractors of Lopez-led Energy Development Corporation (EDC) found themselves in soon after community quarantine and strict travel restrictions were imposed in many parts of the country in mid-March. Many of them endured over 70 days of being stranded before being flown home by the EDC restrictions on movement were relaxed.

EDC, being the largest renewable energy producer in the Philippines, operates geothermal power plants in key regions and provinces such as Bicol, Negros, Leyte, and North Cotabato, a combined solar and wind power farm in Ilocos Norte, and a hydro electric power plant in Nueva Ecija. Employees and contractors often travel to or are temporarily assigned to its different sites as part of their work programs.

“With electricity being an essential resource all the more needed now, the company doubled-down on its commitment to keep uninterrupted, life-saving power flowing into the grid, but we also had a duty to keep our plant employees and contractors – our very own frontliners – safe and supported,” explained Ana Marie C. Agapinan, EDC’s extrication project Team Lead. “We also knew that we had to get our stranded personnel home to their families as soon as we would be allowed to”.

Agapinan led a small team that was assembled to carefully orchestrate the extrication and return of these stranded employees and contractors to their hometowns, which, for some, were on opposite sides of the country from where they were stranded and quarantined. Ariel Rogel Ampong, EDC Operations Excellence Support Head, was tasked to formulate the transportation plan and movement schedule, optimizing the route plans and minimizing transport risks, along with his teammates Josephine Ao and Mheryl Espinosa. “It was truly a concerted effort among several teams in the company,” said Ampong.

The planning began in early April, bringing together representatives from relevant operational units of the company who met twice a week, pivoting and adjusting plans to consider the guidelines of the government’s Inter- Agency Task Force on Emerging Infectious Diseases (IATF-EID), the requirements of relevant Local Government Units, and other guidelines related to travel, which were constantly evolving especially as EDC site locations were subjected to varying levels of community quarantine. Admin heads were tasked to secure the permits, authorizations, and clearances necessary for the transport of the stranded personnel once transport was allowed.

The final number of returnees was reduced to 54 as some have decided to stay in their current site. “Good thing that EDC has comfortable temporary facilities that provide for the needs of employees and contractors who take on the valiant effort of keeping the lights on for our customers and the public despite the pandemic,” said Ampong.

After weeks of careful planning and detailed coordination, a final extrication execution meeting was held last May 23 and the day of return was set for May 25. A chartered flight hopping between Manila, Ormoc, Davao, Dumaguete, and Legazpi was the preferred mode of transportation, but a back-up plan for land and sea travel was also put in place in case quarantine protocols evolved in the interim.

Fortunately, with Metro Manila’s quarantine being downgraded from ECQ to Modified ECQ, coupled with more relaxed GCQ rules in the various plant locations that allowed limited interprovince movements of people (subject to guidelines and requirements), the complex travel plan was set in motion. A 46-seater, twin turboprop aircraft chartered from Air Swift originating from Manila flew a total of six legs, picking up and dropping off passengers at various stops, all completed within a span of 12 hours.

Passengers who alighted in Metro Manila were also brought straight to their homes in Makati City, Mandaluyong City and the Luzon provinces of Bulacan, Batangas and Ilocos Sur.

Neil John Escalera, an operations and maintenance resource support engineer sent to EDC’s geothermal facility in Valencia, Negros Oriental, recounted the lockdown just a few days when he arrived onsite. “I was worried and concerned since I was not with my family during this time of crisis,” he said. “Fortunately, the company did not let us feel alone in this battle. They constantly communicated with us and let us know of their plans to return us home safely.”

“Throughout this pandemic we have been guided by our Lopez Values, in particular, the value of Employee Welfare and Wellness which has been at the top of our list since the pandemic started, and this extrication project and all the teamwork it inspired demonstrated that,” said Miguel de Vera, EDC sponsor of the extrication project. “To be able to fulfill our mission of providing clean and reliable energy to hospitals and essential industries, and, at the same time be able to support, care for, and keep its people safe through this tough time – I don’t think we in EDC could have asked for more.”

EDC’s over 220MW geothermal facility in Negros has been supplying uninterrupted supply of clean, renewable power to the Visayas region for over 30 years ###