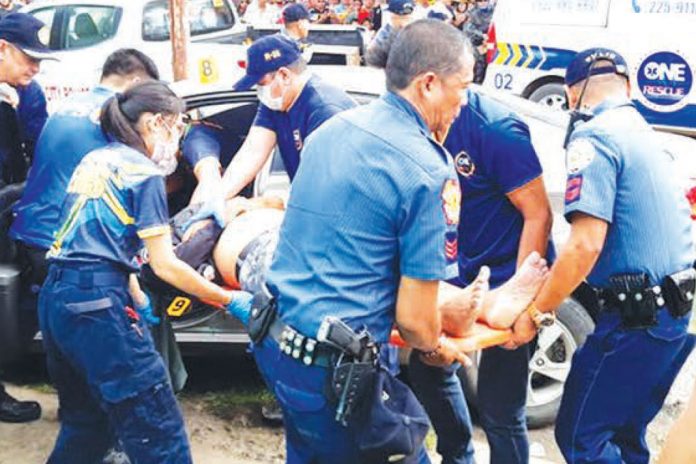 MALACAÑANG—President Duterte has ordered all authorities concerned, the PNP, the NBI, the DOJ, to conduct a thorough investigation of the murder of broadcaster Dindo Generoso, of Dumaguete, and to prosecute at the soonest possible time all those involved in the killing.

Acting on the orders of the President, Justice Sec. Menardo Guevarra Thursday ordered the creation of a team to investigate the killing of radio broadcaster Dindo Generoso of DYEM-Fm Bai Radio.

Dindo Generoso’s body was carried by Police to the Silliman Medical Center.

“We’ll create a special investigating team to look into this incident (as soons as possible), the SOJ (Secretary of Justice), as the chair of the PTFoMS (Presidential Task Force on Media Security) created under (Administrative Order) No. 1, will issue the order creating the Special Investigation Team,” Justice Secretary Menardo Guevarra told reporters.

“The NBI (National Bureau of Investigation) may be tapped to assist as circumstances may warrant,” Guevarra added. The NBI Manila team came here implementing the DENR order to suspend the boulevard reclamation pending completion of papers.

PTFoMS executive directdor USEC Joel Sy Egco showed datas that around 22 blocktimers have been killed since 2003. The PTFoMS said Generoso was an anchor for development programs of the local government.

DUMAGUETE CITY NOV 7, 2019—Radio Commentataor Diindo Generoso, of DyEM-Fm Bai Radio 96.7 fm was killed in cold blood in broad daylight today while on his way to his radio program “Konsensiya sa Probinsiya” aired daily from 7:30-8:40 o’clock in the morning except Saturdays and Sundays.

Generoso was asked by the City Government to handle the governmentsponsored program called Konsensya sa Probinsya which bought airtime over the station.

On-going investigations showed, Generoso slowed down at the intersection of EJ Blanco road and Hibbard Avenue, barangay Piapi when riding in tandem suspects fired at him hitting the victim in different parts of his body that caused his instantaneous death.

Recovered at the crime scene are seven spent shells for Cal. 45 pistol, and two slugs inside Generoso’s car. It was not immediately known if the victim had conversed with somebody on his right while slowing down and maneuvering to the left because the right windshield of the car was partially opened while five bullet holes were seen on the left side of the driver’s seat.

Outraged over the incident, Vice Mayor Alan Gel Cordova who was among those who arrived at the crime scene, said whatever Generoso’s views on certain issues or any media personality, “dili unta angayan nga ingon niaanon siya pagtratar.”

Cordova said if not solved, the justice system will fail the entire community and its leaders, and God forbid this can happen to anybody in the community.

Mayor Remollo at that specific time was on board his flight to Beijing, China together with municipal judges all over the country.

Hopefully, the city-installed P70-million CCTV facility can help in the identification of the suspects who were bold enough to shot and killed Generoso while two CCTV cameras are strategically located in the intersection.

True enough, the probers were able to trace the start of the killers’ path until the shooting and where they escaped. This is because there is a continuous CCTV chain in major streets.

The report identified the transfer red pick up vehicle which the killer rode after the killing. While they were able to trace where the getaway motorcycle proceeded.

Cordova said there’s no question that this is a planned attack considering that Generoso is having a daily morning program at Bai Radio.

The presiding officer of the city council stressed investigation on the matter has to go beyond rhetorics, beyond speeches, it has to go beyond putting up money to solve, the justice system has to really work in order to solve the crime.

Generoso is the third member of the local 4th estate and the 22nd nationwide since 2013, who was gunned down in Dumaguete for the last two to three years, first was broadcaster the late Edmund Sestoso whose killing remains unsolved, and there’s that killing of board member Miguel Dungog also in Dumaguete a year ago…and the murder of DYRD commentator Roger Recania in the early 1990s.

Cordova considered this latest crime a challenge to the present leadership, and if not solved, can be considered a message of fear to all peace loving Dumaguetenos, including media, which is a very important pillar of a democratic space.

The Dumaguete City police is now putting the pieces of the jigsaw puzzle as to the motive and identities of the suspects while checking on the background of the victim, whose radio program deals on present issues affecting the city, foremost of which is the issue on environment, dumpsite issue, shoreline protection-reclamation project at the Rizal boulevard and recently, the issue about the Dumaguete Cockpit and Recreation center.jrg  (By Ben Pulta PNA and Choy Gallarde)