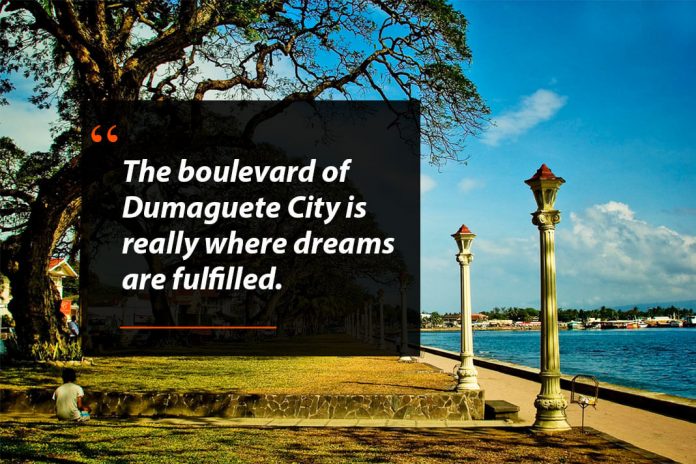 Now it can be told: the Philippine Retirement Authority, PRA, the authority in retirement placement in the country has awarded Dumaguete City as the “most retirement-friendly city in the Philippines for 2018.”

Initially unbelievable, but true. PRA executives told the CHRONICLE on DYEM FM CROSSTALK show that “facility of language and friendliness of the people, affordable standard and cost of living, good univervesities and colleges, well educated leaders, police visibility, easy to do business, accessible transportation by air land and sea, even to international destinations, and a clean government,” are among the major factors that made Dumaguete stand out as retirement-friendly city. Close competitors were Tagaytay and Puerto Princessa.

The cirteria used were the standards of the United Nations and the World Health Organization. The PRA records 374 accredited foreign retirees in Dumaguete mostly Caucasians and Europians.

There are 374 retiree- PRA members in Negros Oriental, 225 of them are in Dumaguete City.

They admitted that over a thousand more at least, are not officially registered and just came in on their own. The PRA executives (see photo on jumps) urged alien retirees to register with t the PRA for more privileges and amenities.

Mayor Remollo offered PRA a desk in the city tourism office for convenience of retirees. PRA has four satellite offices in Davao, Clark,Cebu and Baguio. Another one will soon be opened in Dumaguete.

The country’s premier authority in the international retiree options selected Dumaguete City as the most retirement friendly locality in the entire country based on the standards for older persons set by the United Nations and World Health Organization.

Philippine Retirement Authority, which is directly under the Department of Tourism, sent a team to the city, Wednesday, to confer the distinction to Mayor Felipe Antonio Remollo for his initiatives and programs that turn the city as ideal place for retirees.

Mayor Remollo lauded all the stakeholders for their contribution in making this City of Gentle People the ideal place for foreign and balikbayan retirees to spend their golden years in comfort. Previously, Dumaguete was also named as one of the best places to retire abroad.

PRA found that based on the United Nations and the World Health Organization standards Dumaguete City provides retirees with adequate and cheap food; modern and affordable medical facilities and services; secure housing; plenty of leisure and entertainment venues and choices; integration are easy for both LGBT and handicap individuals; foreigners enjoy tax exemptions for pensions; communication and internet is fast and inexpensive.

Overall public infrastructure is deemed adequate based on Western standards while the cost of transportation remains cheap.

The city is relatively safe place and security is visible almost anywhere and drivers are generally law abiding and courteous and serious accidents are rare.

But PRA expects that many more are unaccounted, hence, Mayor Remollo supports the plan setting up of a satellite desk in the City Tourism Office to enhance the assistance and proper accounting of the retiree-members.