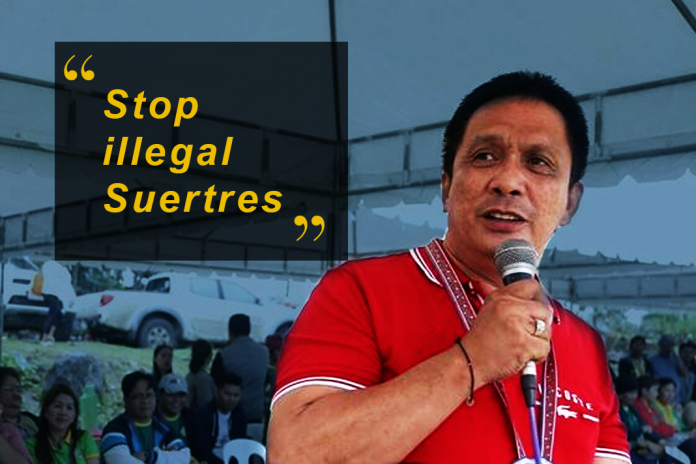 NEGROS ORIENTAL – Negros Oriental Gov. Roel Degamo has ordered a stop illegal suertres who are operating  to the detriment of the legal  Small Town Lottery (STL) in the province that is operating under the Philippine Charity Sweepstakes Office.

Degamo issued the order after learning from the senate inquiry, an STL franchise per se is legal but there  are operations that are taken advantaged of  by private individuals without permits, defrauding the government of the necessary revenues.

As a result of the illegal operation,  billions of the projected revenues from the operation of STL nationwide were in the hands of illegalists, Degamo pointed out.

For Phil Charity Sweepstaskes  PCSO branch manager Belena Alvarez Four Aces Corporation being represented by Christopher Santiago is still the approved franchisee as operators of STL in the province unless superceded or unless they will receive a memorandum from higher  from the national office to stop the same.

She further said the Four Aces is an Agency Authorized Corporation (ACC) with a PCSO board approval. Thus, cant say it is operating illegally.

However, it has to comply with all the requirements, one of which is for the corporation to remit  P21 million in revenues to the PCSO every month.

Records, however, showed it has not  complied with this agreement. She was told the corporation, their revenues is affected by the illegal numbers game swertres.

Of the projected revenues due the government of P21 million a month from STL operations in the province, the corporation is remitting only from P8 million to P10 million a month, PCSO manager Alvarez told reporters.

The governor   told Philippine Charity Sweepstakes Office (PCSO) branch manager Belena Alvarez who paid him a courtesy call Thursday  morning, he will put in writing his stand on the operation of the STL in the province in a letter addressed to the new general manager.

Degamo has directed the police to dismantle illegal  STL kiosk, booths or substations found in the barangays to stop illegal suertres that are operating illegally because government had been  prejudiced.

He received reports a lot of  private individuals just established what looks like an STL kiosks but receiving bets on the illegal swertres and remit the same to their “boss” who siphoned all the moneys.

He further said this is the reason why to illegalists in the province wanted him out of office because he is determined to run after them.