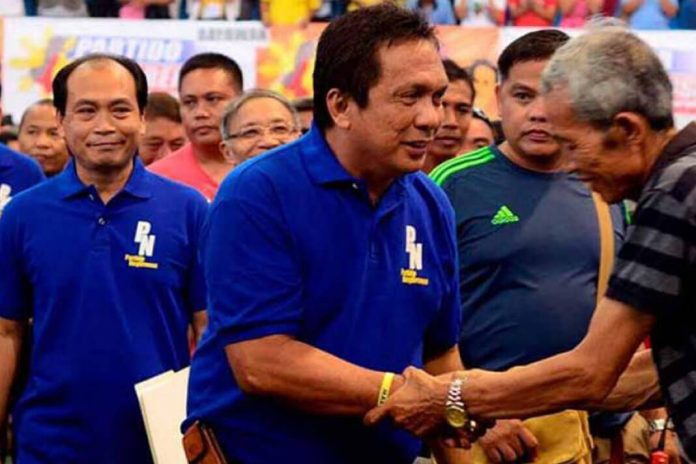 NEGROS ORIENTAL – Negros Oriental Gov. Roel Degamo says he is definitely bent in retaking the provincial capitol starting WEDNESDAY, January 17, 2018 after the expiration of the his 90-day preventive suspension by the Court of Appeals (CA), and after the issuance of the Temporary Restraining Order (TRO) from the CA in Cebu for his dismissal case by the Ombudsman.

Degamo noted that  the Temporary Restraining Order (TRO) was issued effectively and  valid for 60 days and restraining  the Office of the Ombudsman Visayas, the Department of Interior and Local Government (DILG) and their representatives from implementing, carrying out, or enforcing the March 2, 2017 dismissal  decision of public respondent which is the Ombudsman.

However, following procedures the Department of Interior and Local Government (DILG) provincial office  can not  implement the order until Manila DILG head office gives the green light.

Provincial interior and local government officer Dennis Quinones, has confirmed Monday  afternoon  of January 15  that he received a certified true copy of the Temporary Restraining Order (TRO) from Atty. Enojo, the legal counsel of Gov. Degamo but could not implement the same in saying  it does not come from his superiors in Manila to whom the Temporary Restraining Order (TRO) was addressed and  his actions will be dependent on the order of his bosses  at  the DILG Central Office in Manila. A copy of the TRO  therefore  was also sent to the Office of the Sangguniang Panlalawigan.

Upon receipt of the letter with attachment of the TRO coming from Degamo’s camp, Quinones said he immediately transmitted the same to DILG Central Office because the addressee is DILG Usec. Austere Panadero.

The TRO states, whereas finding the reasons stated in the application to be sufficient and so as not to render the reliefs prayed for by the petitioner moot and academic pending the resolution of petitioner’ Degamo’s  prayer for the issuance of a writ of preliminary injunction. The application for the issuance of a temporary restraining order was granted and signed by three associate justices of the Court Appeals, Associate Justice Marilyn Lagura-Yap, Edward Contreras and Louis Acosta, dated January 11, 2018.

In an interview, sitting Gov. Doc Mark Macias said he is more than willing to step down as governor for as long as he receives the order from the DILG. But it has to go through the proper channels, until the official copy will reach the DILG provincial office. He said this has happened thrice already, when he was ordered by DILG to assume the position and so will wait for the DILG to serve the TRO. “I will not stay a minute longer if it comes,” he said.

After a meeting with department heads today, Gov  Marcias directed Berchman Patrimonio, whom he designated as the provincial administrator to coordinate with offices concerned for the use of the Freedom Park, complete with sound system and canopies    if they wish to gather  on   Degamo’s return, in requesting  degamo’s camp not to block  the way to the provincial capitol  vvfor easy access to people who will have   transactions  with the capitol during that   day.

Macias assured negrenses he will not do anything to aggravate the situation, will immediately step down if served the official order from the DILG. What the local DILG has now is just a certified copy of the TRO  oreirng degamo to return for 60 days pending resolution of the petition for permananet injunction.

Macias made it clear he cannot leave office of the governor without that official DILG order from Manla   because it will tantamount to dereliction of duty.

He appealed for calm and sobriety for supporters from both sides because just like before, he willingly stepped down upon receipt of the order.

On his  part, Macias assured that he  will not call for people power,and will report for work at the capitol on that day,Macias  will be holding office, and  if the order arrives he  will accept it and endorse everything back to Gov Degamo,” Doc Mark Macias assured the public .

Reacting to Doc Mark Macias’ statement, Degamo wished Macias will act as speedily  as   degamo stepped down when he was officially suspended 90 days ago on Oct 16.