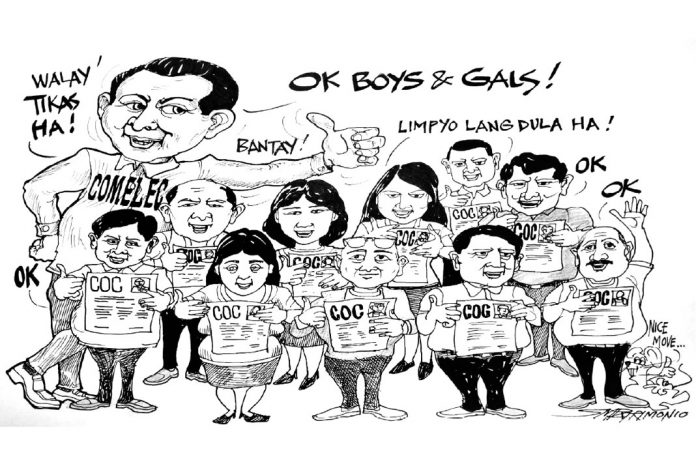 If the political climate is uncertain, and the true mandate of the people might be threatened or compromised in an election, against the interest of politicians, their traditional option is —— why fight? Let’s bond and form a coalition!

And so it was done . Upon the initiative of Bacolod’s Congressman Abet Benitez, the One-Visayas Block was virtually conceived with the forecast of matching the Luzon and Mindanao blocks just in case the federal charter pushes through, for a new form of government.

In just a few weeks of conception, all of Visayas governors, city mayors and congressmen decided not to put up respective opponents and assured their rival camps of fair share in the elective position in the May 13 mid-year elections.

Their reasons: suppose Duterte could not finish his term by one reason or the other; suppose there will be the transition government under a new federal constitution; suppose there will be martial law and violence; suppose the superpowers will support a coup, how will the local officialdom respond with strength if they are not united? They will just be swallowed by the new dispensation. So local governments took this chance in May 13 to form a coalition of sorts in or der to negotiate in the position of strength, not weakness.

Indeed the coalition has made the incumbents “stronger” now that their oppositions are virtually neutralized. This is good for the speedy implementation of the construction boom, but , a coalition is never good for a democracy. Look at the opponents upon filing of their COCs. The “opponents” are virtually sitting ducks against the aggressiveness of the incumbents.

But not all. There are still formidable and serious opponents who cannot be cowtowed by the whims of one man. There will always be those who will oppose both the legislation and administration policies.

Good for Dumaguete city we have a three-cornered fight for mayor and vice mayor. And worse, they brokeaway from the coalition to fight the artificial giant.

But the bad part is the opposition does not have any organization to speak of; no legislative team to form and support their policies; in short we are looking at a chaotic and less vibrant legislative body.

So let’s just play the game seriously and well okey?

After all the journey to a thousand steps starts with the small big leap.