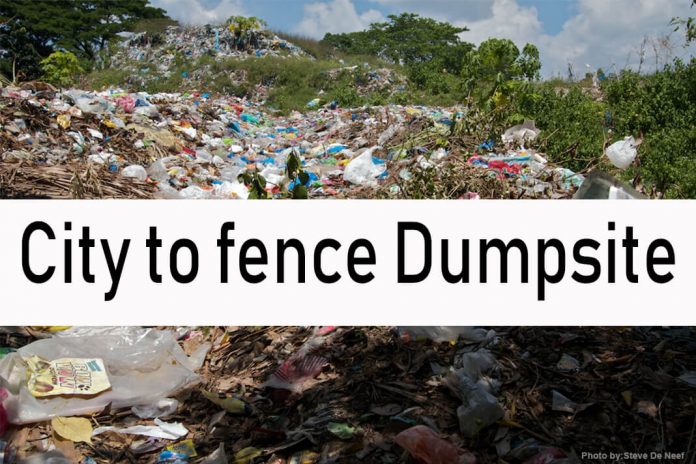 DUMAGUETE CITY – Mayor Felipe Antonio Remollo ordered the City Engineer’s Office to prepare a plan and budget to install a fence around the dumpsite to control the entry of garbage trucks and scavengers.

He also instructed the ENRO personnel to be consistent in the enforcement of rules in the dumpsite and to assign personnel 24-7; the scavengers were told to dismantle their shanties (barong-barong) within this week and assign police personnel to constantly assist the Environment and Natural Resources Office personnel in enforcing order and clear the road of dumpsite.

All available heavy equipment (including the just delivered brand new payloader) to the operation every day until all the accumulated garbage shall have been cleared and pushed back to the interior of the dumpsite.

Upon learning of the dumpsite’s sad state, in which heaps of trash littered the road making it impassable to motorists, Mayor Felipe Antonio Remollo led personnel from ENRO, City Engineer’s Office and Philippine National Police in clearing the road of all trash and debris.

Junob Barangay Captain Isagani Bana is ready to volunteer his time and effort to consistently implement the instruction of Mayor Remollo on how to manage the dumpsite.

Mayor Remollo instructed the engineers to assign the equipment and personnel every single day to maintain the tidiness of the road and keep it open to traffic. A network of road will be built leading to the interior of the dumpsite so that garbage trucks can unload inside the dumpsite.

Some policemen will be assigned in the dumpsite to arrest, if needed, any scavenger or any person that will engage in littering, obstruction or improper disposal of garbage.

Mayor Felipe Antonio Remollo held an impromptu meeting this Sunday morning with the scavengers at the city dumpsite to remind them that they must follow the rules or they will be arrested for obstruction, littering and in some cases for threats against personnel of the Environment and Natural Resources for enforcing the rules.

He reminded the scavengers that they are prohibited from blocking the garbage trucks and forced them to unload the trash along the road; they must dismantle their shanties or barong-barong within the week and they should be accounted or registered and must wear IDs.