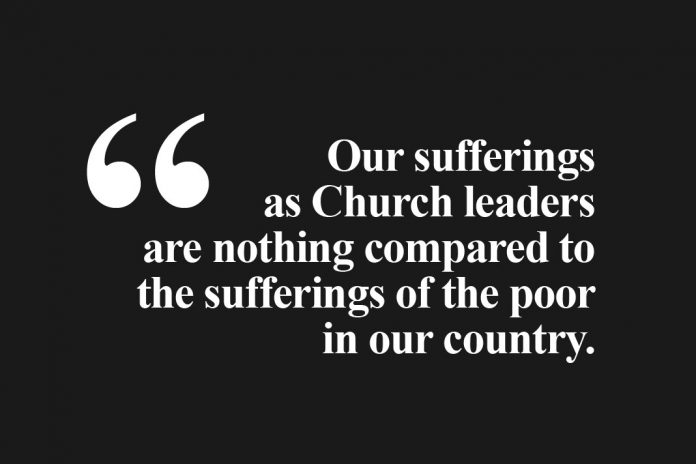 “Blessed are the peacemakers, they shall be called sons and daughters of God.” (Mt 5:9)

Dear brothers and sisters in Christ, do we not all aspire for the grace to be called “sons and daughters of God?” If we do so, then we must constantly strive to be peacemakers in these troubled times in our country. And that means to always strive to bring love where there is hatred, pardon where there is injury, faith where there is doubt, hope where there’s despair, light where there is darkness, and joy where there is sadness (from the prayer for peace attributed to St. Francis of Assisi).

PEACE: OUR COMMON VOCATION AND MISSION

Our enemies in this world are not fellow human beings, not “flesh and blood” (Eph 6:12). We do not fight our battles with guns and bullets. We do not seek protection from those who might wish to harm us by wearing bullet-proof vests, because the battles that we fight are spiritual. In these times of darkness, when there’s so much hatred and violence, when murder has become an almost daily occurrence, when people have gotten so used to exchanging insults and hurting words in the social media, we admonish the faithful to remain steadfast in our common vocation and mission to actively work for peace.

But make no mistake about it; even the master said, “Not as the world gives peace do I give you peace.” (Jn 14:27). His peace is never the peace of compromise or capitulation to evil; it is also not about the absence of conflict and turmoil. Was he not rejected by his own townsfolk in Nazareth? (Lk 4:16-30) Was he not called crazy by his own relatives? (Mk 3:20-22). Was he not called a “prince of demons”? (Mk 3:22-30). Was he not called a drunkard and a lover of tax collectors and sinners? (Mt 11:19)

Did he not show us how to deal with adversities when he slept in the boat, or walked on water even in the midst of a storm? (Mk 4:35- 40; Mk 6:45-52) But like the apostles, we are often so easily overcome by fear and panic. Even when we’re already making baby steps on troubled waters like St. Peter, we find ourselves sinking because of our “little faith” (Mt14:31). There is nothing that can calm us down in these turbulent times except the quiet recognition of him who assured us of his abiding presence — “Be not afraid; it is I!” (Mt 14:27)

THE COST OF WITNESSING TO CHRIST

What is new about priests being murdered for witnessing to Christ? What is new about modern prophets being silenced by the treacherous bullets of assassins? What is new about servant leaders who are maligned because they have carried out their duties as shepherds configured to the person of their Chief Shepherd? Have you forgotten that “the blood of martyrs is the seed of Christians”? (Tertullian) It is what has kept the Church alive after two thousand years. Be not afraid! Did not our master say, “Do not be afraid of those who kill the body but cannot kill the soul. Rather be afraid of the one who can destroy both body and soul into Gehenna” (Mt 10:28)?

We are no strangers to ridicule and persecution. What we are going through is no different from what the Psalmist describes in Psalm 64: “They sharpen their tongues like swords; they aim bitter words like arrows to shoot at the innocent from ambush, shooting suddenly and recklessly.” But what does the Lord tell his disciples when they are persecuted or humiliated for his sake? He tells them to “rejoice and be glad” (Mat 5:12). These are the very words with which Pope Francis opens his apostolic exhortation “Gaudete et Exsultate”. They are the Lord’s words to those persecuted and humiliated for his sake. With the intention of calling us all to strive for a life of holiness, Pope Francis says the Lord does not want us “to settle for a bland and mediocre existence” (GE 1). How have we been taught to deal with persecution? Listen to what the apostle, St Paul, says, “When we are insulted, we respond with a blessing; when we are persecuted, we bear it patiently; when slandered, we respond gently. We have become the world’s refuse, the scum of all; that is the present state of affairs” (1 Cor 4:12-13).

And how are we to deal with divisions among ourselves? How are we to deal with fellow “Christians” who see nothing wrong about the killings, who just laugh when our God is blasphemed, and who take part in passing on fake news? Did not the Lord himself warn us that part of the exigencies of working for peace is having to go through the crucible of conflicts? (Lk 12:51-53) There will always be those among us who profess the faith in Christ but are so easily seduced by the empty promises of Satan. Remember him who once sold the master for 30 pieces of silver because he had allowed himself to be mastered by Satan? St. Paul is right in saying, “…there have to be divisions among you in order that those who are genuine among you may become known.” (ESV 1 Cor 11:19)

THE SUFFERINGS OF THE POOR

Our sufferings as Church leaders are nothing compared to the sufferings of the poor in our country. Do we not hear the cry of poor slum-dwellers being jailed for “loitering”? Have they forgotten that for the homeless urban poor — the little alleys between their flimsy homes also serve as kitchens, bathrooms, recreation spaces, and playgrounds for their children? Have they forgotten that they live in tiny dwellings that are razed quickly to the ground when fire strikes, because they do not have proper roads? Do we not feel the sufferings of drug addicts who are labelled as “non-humans”, and are stigmatized as criminals when their names end up in the dreaded “drug watch lists”?

Yes, we are aware of the sufferings of those who have been victimized by substance abusers, but can we not see them also as sick people who are struggling with a disease? Should we not rather look at them also as victims who are crying out for help? Are we to remain as bystanders when we hear of people being killed in cold blood by ruthless murderers who dispose of human lives like trash? Do we not realize that for every drug suspect killed, there is a widowed wife and there are orphaned children left behind — who could hardly even afford a decent burial for their loved ones? Do we not care when poor people’s homes are searched without warrants, or when drug suspects are arrested without warrants, or detained without charges? (To be continued)