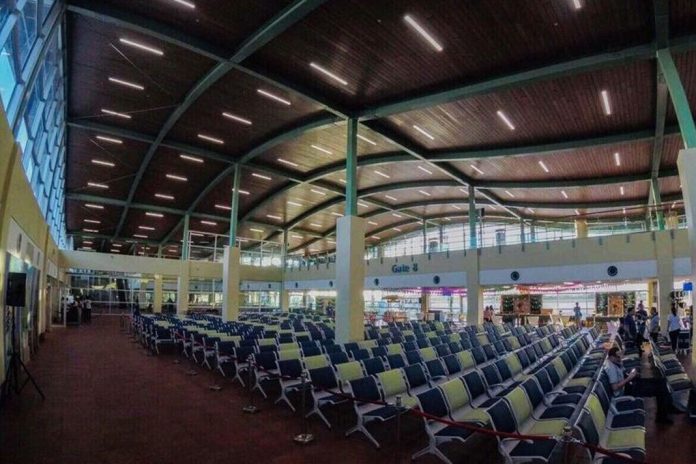 We breezed into the new Panglao Interna-tional Airport and we noticed that most of  Bohol’s downtown hotels  were virtually empty as most of hotel residents rushed to transfer to Panglao’s string of beach resorts  because the Tagbilaran airport is now closed to air traffic.

The opening of this brand new P11-billion international airport thru JICA of Japan has made a new city of Panglao island, this once-lowely god forsaken flat land is now the latest hub of interntional desitnations with an expected 2million tourists annually, but gradually.

But naturally, inbound and outbound international tourists would now check-in at Panglao resorts no longer in downtown Tagbilaran city which was near the old airport.  The old one will soon be converted into a business park. There has been a dramatic economic switch to Panglao from TAgbilaran.  We can fly to Clark and Korea daily from Panglao now.

The 132-hectare international airport is a virtual island city. Its wide six-lane highway extends from the tip of each runway. It is powered 30% solar energy at night in anticipation of night flights. Right now the airport services direct flgihts to south Korea roundtrip; direct to Clark airport and back; to Davao  and Cagayan. Soon to open will be Narita Tokyo direct; Taiwan direct; Beiging direct;

Later Lax USA and Toronto Canada.  You can just imagine how this economic landscape will transform the island of Panglao and Bohol into an international  hub  which right now it already is.

NO TIME FOR CHA CHA

Like the saying goes, it’s too late in the day to cha cha. The Senate assured that it has no more time to discuss charter change which is like saying “but what’s in for us? So we can talk about it.”

Right now, Congress up and down, are busy talking about the budget for next year which is election year.  Money again will talk.  This election will be a test as to whether Duterte’s boys can win witout much vote-buying.

The voting culture of Filipino masses is that “no money no honey,” meaning, regardless of principles, blood relations,  influence, if the candidate does not give money to most of the C.D.E  voters then nothing will happen. We cannot feel that in Dumaguete.  But YES in Siquijor where a vote would cost the candidate between P2000 to P6000 per voter. In Dipolog, maybe half the price or higher.  Unbelievable.  Dumaguete vote-buy price in the last barangay elections went high to P700 per voter.

Same with Bohol elections. No money, no honey even if the candidate is your friend, have principles and even track record, if you do ot come up with what they want, sorry no vote for you. After all the poor voters say: we also know that after elections, nobody will remember us here in the barrios anyway. And besides, most winners will also recover their expenses in  whatever ways.

When it smells like, looks like, walks and talks like pork it must be pork.  So what do you call a congressman who has P16Million  in reserve for national projects in his district  and would ask the department hed  to charge his projects for such allocation.? Pork or not? How does it smell?

In the past, it was the reverse, the cong and sens will identify his own project for funding. Now it is the reverse.  Yet, this is still being violated.  Filipinos are like Israelites and Hebrews——very hard headed until God will punish them.

The other side: of course it’s pork. The fact that the congs and the sens are given such allocation for national projects, they may or may not take it seiorusly and so there goes your project. But the dept head can push for such project even without the congs and the sens . Yet much better and faster if they had the cong and the sens who will be there to “facilitate” the fruition of the project.

The military announced that it will not hold any Christmas truce witn their enemy regardless if whether the NPA will call for any ceasefire. Why,—- has there been any serious ceasefire ever since? Since when were they two protagonists been serious in talking,— we mean, bluffing?

We don’t exactly believe that the SAF special action forces  to be sent to Negros will be effective in their mission unless they will first know the terrain, the people, and the culture. Unless they do , they cannot find their enemy because they are mixed with the people .And their guns are buried under the ground. They will just look like plain peace loving people.  We hope it will not end up again with issues of “ being  planted and having  mistaken identities.”