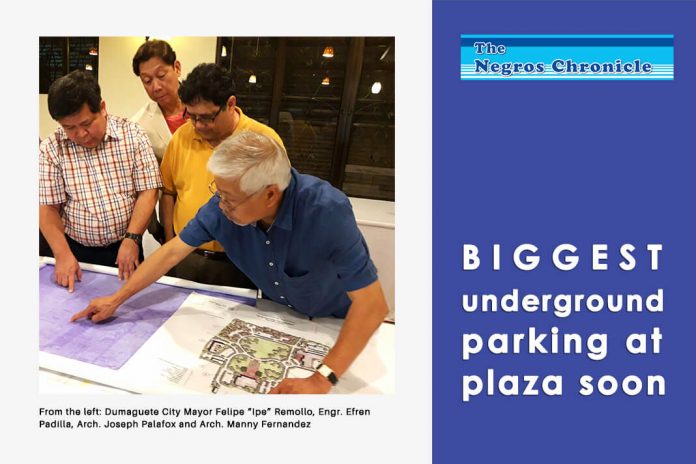 DUMAGUETE CITY – A one-hectare underground parking area, fit for a thousand and one (1,001) vehicles, will soon be built under the present old City Hall building up to the Quezon Park which is part of the master plan of the City under Mayor Felipe Remollo. This is seen as a major breakthrough in solving the parking space problem in the city.

The downtown area of Perdices street will be a walk area with people parking their cars underground. The planned underground parking will span up to the public market area.

This is all under the tutelage of U.S.-based Filipino Architect and urban planner Engr. Efren Padilla, Architect Joseph Palafox the name rings a bell in Philippine architecture, and Architect Manny Fernandez, urban developer and designer and former vice mayor of Union City. He helped landscape San Fancisco U.S.A.

The historic Quezon Park in Dumaguete will be refurbished. Below will be an underground parking space similar to cities abroad. The funding will be done under the Public-Private Partnership (PPP) program wherein a foreign investor will build the project at their own expense and will recover the cost through parking fees for a number of years. The city might also be renting-to-own the huge parking space. In short, at no expense of the city.

The belfry tower will be refurbished being an icon of the city’s identity and historic past. It is here where the city fell into the hands of the Japanese where the people gathered inside the cathedral for refuge during the war.

Recently, the Dumaguete City master plan was revised to suit the new changes in the city by Mayor Felipe “Ipe” Remollo and LUPAD Dumaguete team.