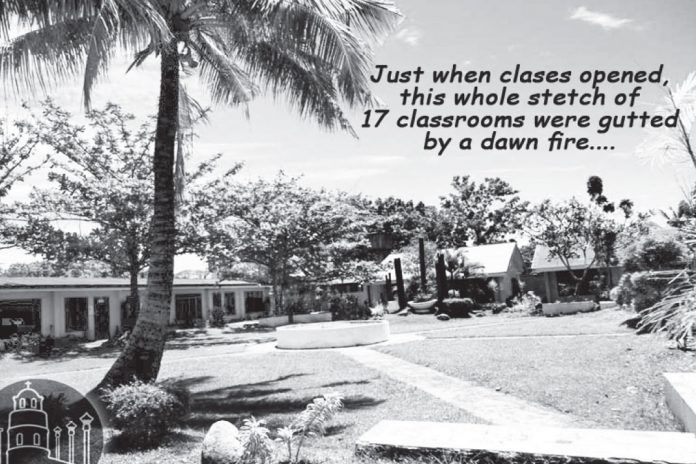 It was such a bad timing.

Just when classes reopened a few days ago, no less than 14 of 17 high school classrooms burned down completely last Thursday dawn, the study room for over 500 senior students at the City High School in Calindagan.

The City High School is the home of 2500 students from Dumaguete. What was completely leveled by fire which was initially traced as having been caused by faulty electrical wirings” (as usual?) were 17 Marcos-type 1960s ventage onestorey classrooms which was also due for demolition due to old age. The site will be used as part of the athletic sports oval in the sprawling city high school campus in Calindagan.

Although arson is a far-fetched possibility, we ask the question: why did a “spark” precisely start at dawn when it was cool devoid of the summer heat, except the fact that there was a sudden downpour at that time on that dawn . It is possible that very old loose and open electrical wirings sparked a short circuit that might have started the blaze in a totally empty building.

Timely too or not, the building was already due for demolition because the site will be part of the athletic sports oval which will be expanded shortly. On its opposite side will be the proposed three-storey affair for a new senior high classrooms to replace the very old structures.

But hey, only now did we know from City High authorities headed by Principal Aldin Rabina and Dr Jude Mapui, curriculum division coordinator, that a few weeks ago, all the automatic votecounting machines for Dumaguete cluster of precincts were housed there inside that building! What a disaster could it have been if the fire occurred when the vote counting machines were stocked inside?

What is also fact is there was no recent inspection by fire authorities on the safety status of the building when the machines were inside.

So can we say that it was a blessing that the fire occurred a few weeks after elections when nobody was inside? What if all the vote counting machines were inside!

Lesson learned: all dilapidated structures must be thoroughly inspected regularly by the fire department be it public or private. The fire at the City High School where vote counting machines for Dumaguete were stored was already a high risk, and a fire hazard at that time.

The blessing is, that the blaze erupted 36 days after the midterm elections sparing all those vote counting machines which were stocked inside!