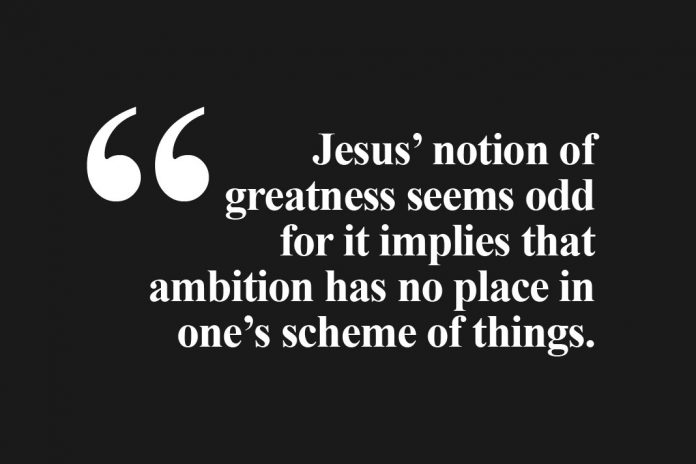 On their way to Capernaum the disciples of Jesus were engaged in a heady and stealthy discussion on their own. But Jesus overheard them. When they reached the city of Capernaum and went into a house, probably Peter’s, Jesus asked them, “What were you arguing about on the way?” The Twelve were embarrassed and met Jesus’ question with stony silence. They must have realized that their internal squabble about high honors, power and prestige in God’s Kingdom was totally off the mark of what Jesus said earlier concerning his approaching suffering and death.

Interestingly, Jesus did not reprimand them but took their decidedly ridiculous argument seriously. Jesus deliberately took the position of a Jewish Rabbi by sitting down and authoritatively taught the Twelve a redefined notion of “greatness,” spelling out new categories for “determining success and failure, winning and losing, achievement and unfulfillment” (Walter Brueggemann, et.al. Texts for Preaching, Year B, p.520).

In Shakespeare’s Twelfth Night, Malvolio comments: “Some are born great, some achieve greatness, and some have greatness thrust upon them.” There is a germ of truth in this statement, but it falls short of Jesus’ notion of greatness. “True greatness is neither born in you, nor achieved by you, nor imposed upon you. It is rather, the byproduct of the deeper qualities of our human nature” (Donald Macleod, Know The Way…). “If any one of you would be first,” Jesus said, “he must be last of all and servant of all.” Jesus made it plain to his disciples that if they desired for greatness in God’s Kingdom, they will find it not by being first, not by being masters, but by being the servants of all.

Seen in the light of a widely held view, Jesus’ notion of greatness seems odd for it implies that ambition has no place in one’s scheme of things. Jesus, however, did not seek to abolish ambition but to sublime it. For the desire to do things for others. “Ask not what America can do for you,” John Kennedy said, but “what you can do for America.” Ambition is morally neutral. It is good or bad depending upon the reason and purpose for which one is ambitious. If we are ambitious for greatness for its own sake and for our desire for greatness, it can destroy the best that is in us and hinders our usefulness to others. But if our burning desire is to place self in the service of others, then we will have a type of greatness that claims our deepest loyalty and contributes to the common good. William Barclay, a renowned student of the bible, suggested that the questions, “How can I shine?” should be transmuted to “How can I serve?”

To illustrate the meaning of, and difference between, worthy and unworthy ambition, Jesus took a small child and placed him in the middle of the disciples. Jesus did not highlight the child’s naivete or innocence or trustfulness, but the child’s helplessness and lowly status, as one always under the authority of others. Indeed, if we want to advance our position or career in life, the child cannot be of any help to us. The point Jesus made is that like the Twelve, we should seek to cultivate friendly and supportive relationship with people who are not in a position to do things for us, but for whom we can do things. This may sound too unrealistic, not to say useless, in a fiercely competitive world. But Jesus’ simple notion of greatness is indeed profound. It has the power to bring about radical change in the way we order our individual and social life. Suppose, for instance, that all Christians will practice this simple virtue. They will serve as agents in minimizing divisions and in resolving disputes among people in the wider communities in which they live. Christians will become proactive peacemakers in a strifetorn world. They will make themselves available for elective positions not for fame, prestige and fortune that high offices bring, but for an opportunity to serve the public. Christian business people would feel an inner compulsion not only to earn profits honestly, but also to use them to ensure the well-being of their communities. Division and disputes that tear the church asunder will, for the most part, be unheard of if the desire of office-bearers and members alike is to serve without giving second thought to the position they occupy.