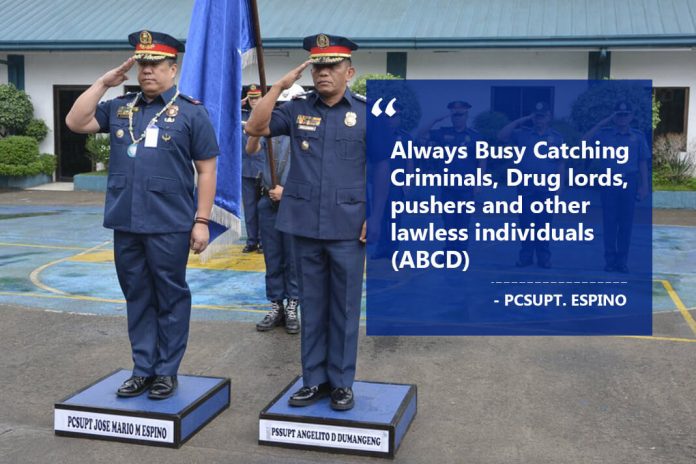 PC/Supt Espino would not want to see policemen busy texting, browsing the internet, and their respective social media accounts, but rather be always reminded of the ABCD motto.

During his first command visit in Negros Oriental, PC/Supt. Espino directed PNP provincial director PS/Supt. Edwin Portento to take charge on the threat of the rebel New Peoples Army after the Guihulngan ambush-slaying of 6 policemen and the wounding of several others.

“We will not let another Guihulngan incident happen hence the creation of a Negros Oriental Task Force to address insurgency,” the PNP Regional Commander said. Espino brought along with him one platoon of fully armed PNP personnel coming from the Regional Public Safety Battalion (RPSB).

The fully-armed platoon ready for battle is supervised by no less than Espino’s Deputy Regional Director for Operations PS/ Supt. Dennis Agustin. The platoon-size contingent will focus on areas where sightings of rebels are reported including identified guerilla bases and camps with a motto that the best defense is offense.

Espino directed Portento to make sure the insurgency problem will not hinder the growth of the province especially when told by Gov. Degamo Negros Oriental had surpassed Cebu and other provinces in the region insofar as economic growth is concerned.