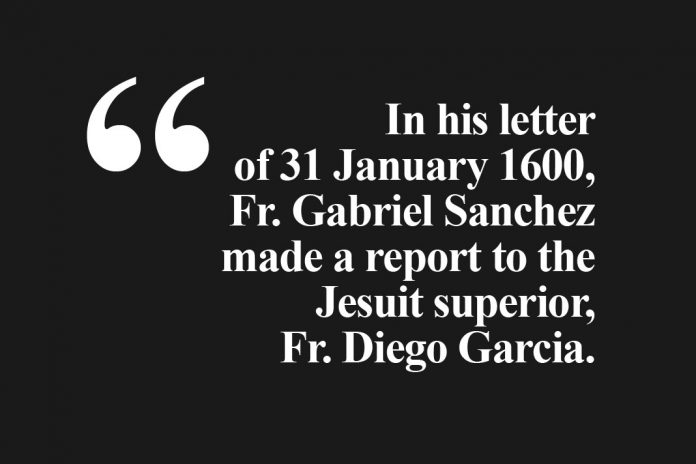 As a town, Tanjay became a parish in 1599 with the ap pointment of Don Diego Ferreira, the bishop’s vicar and first archdeacon of Cebu Cathedral.

Since Don Diego Ferreira did not know the Visayan language, he requested the help of the Society of Jesus. It was the Jesuit Gabriel Sanchez who accompanied him to Tanjay in promoting the work of evangelization for a period of 40 days from December 1599 to January 1600.

In his letter of 31 January 1600, Fr. Gabriel Sanchez made a report to the Jesuit superior, Fr. Diego Garcia. “In all the instructions and sermons which I preached in the time I was there, about forty days, I repeated four or five times the articles of faith, the commandments of God and His Church, urging them to believe and observe what was of obligation, setting before them the external reward and punishment.”

“In the same way I explained the sacraments and their effects; the seriousness and ugliness of sin; the beauty and effects of grace; the difference between soul and body; and how in danger of death, if there is no opportunity to receive baptism or to confess, that God does not abandon us but accepts in their place the act of perfect contrition with the desire of baptism or confession. They were instructed in all these points and in the Christian, moral and practical virtues.”

Juan Orenday, the datu of the pueblo, stood out in this exercise. “The archdeacon (Don Diego Ferreira) as in admiration at this, especially when he saw the governor of the pueblo, the most prominent, feared, and respected in the land, rise to his feet, as though he were a student, and repeat in the presence of all the points which we had touched on in the sermon.”

Commenting on this, the Jesuit historian, Fr. Horacio de la Costa, has this apt description. “The garrulous people of Tanay, who liked nothing better than a prolonged exchange of views, took to this with great enthusiasm, the datus especially trying to outdo each other in eloquence.”