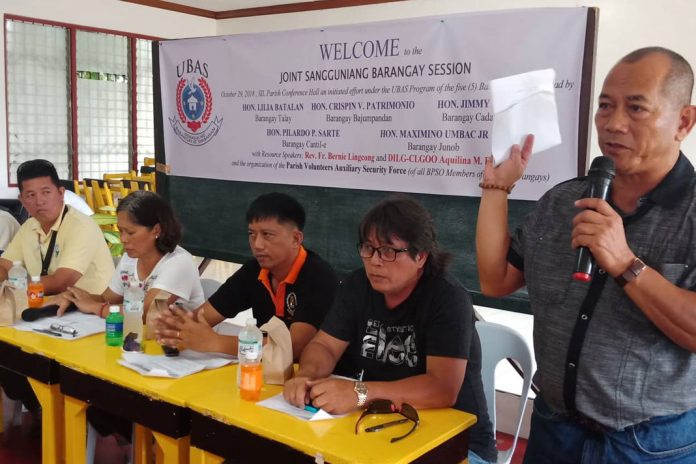 Citizens from five barangays formed a volun-teer security council who intend to protect their Catholic chapel from vandals and thieves thru citizens action.

They have organized the socalled Parish Volunteer Auxiliary Security Force, mainly to help secure the premises of the San Isidro Labrador Parish Church from burglars and other criminal elements.

Parish priest Fr. Bernie Lingcong (holding mic) had earlier intimated to the five punong barangays of Talay, Cadawinonan, Junob, Cantil-e and Bajumpandan the concerns of the parish and on what their respective barangay tanods can do about it.

Before his assumption as parish priest of San Isidro Labrador Parish and social action director on August 2, this year, he was briefed about incidents of theft and burglaries in the Church, electrical wiring connections were stolen, the collection box was destroyed and its content stolen, among others.

And when he assumed as parish priest, he has observed a desecration of the church, noticed youngsters dating inside the compound, and worse, recovered illegal drugs paraphernalia in the vicinity, sensing that illegal drug transactions may have been conducted in the compound.

Among the first to respond through a barangay resolution is Bajumpandan where a resolution to this effect was authored by Kag. Reu Ismil, chair of the peace and order committee of the barangay seconded by Kagawads Choy R. Gallarde, Noelito Ramirez and Felomino Solamillo.

But before the joint resolution, cooperation and coordination among the five barangays was already implemented, where tanods from each barangay are doing roving patrols with intervals of 20 to 30 minutes.

City Local Government Operations Officer (CLGOO) Aquilina Eltanal explained during the joint session held at the parish conference hall, the concerned of the parish is legitimate and that the barangays concerned were merely invoking provisions of a memorandum circular issued by the Department of Interior and Local Government (DILG) to intensify coordination between the church and the barangays to maintain peace and order under the UBAS program or Ugnayan ng Barangay at Simbahan, that would redound to the benefits of the church and the parishioners who compose the parish.

Furthermore, Eltanal told the joint session in case of doubts about the issue of jurisdiction, duties and functions of the barangay tanods, their insurance coverage in the event of accidents while on duty, she suggested to submit said joint resolution for review by the Sangguniang Panlungsod of Dumaguete City.

But she believes what the five barangays are doing is still within their mandate to ensure the safety of their respective constituencies. The five barangay captains have chosen Talay village chief Batalan as the presiding officer and Bajumpandan Kag. Choy R. Gallarde as joint session secretary.