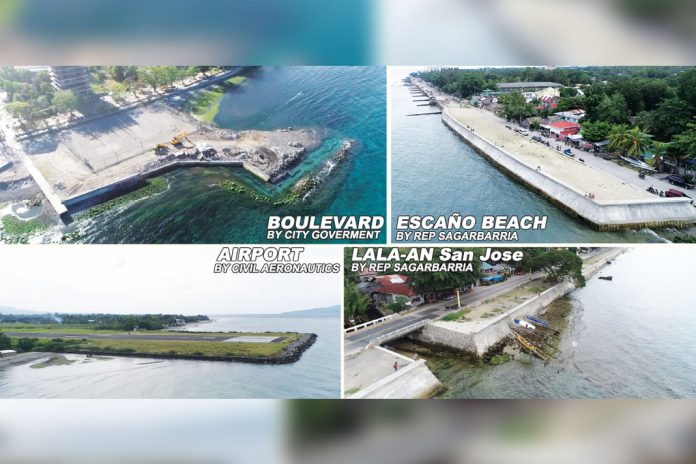 DUMAGUETE CITY – There are at present five shoreline protection projects ongoing in different parts of the city and the second district and for two self-proclaimed critic-environmentalists, they singled out only one out of the three. People wonder why.

The three on-going shoreline protection or reclamation projects are:

The DPWH reclaimed northern shoreline of Dumaguete to expand the Flores Avenue along Escaño beach; the expansion of Lalaan, San Jose boulevard both courtesy of Rep. Manuel Chiquiting Sagarbarria which are nearing completion. And the 1.7hectare shoreline protection at the boulevard in Dumaguete.

Also the Calindagan fisheries reclamation which started with a school compound under the Sagarbarria administration, and expanded to the fisheries building shoreline; and the Sibulan airport extension which has affected the sea bed of Silliman beach.

And lest the people forget: the infamous waste water treatment facility funded by USAID, thru former Vice Mayor and then city administrator William Ablong at the souther part of Quezon plaza, fronting the historic and iconic belfry which is now a total environmental disaster right in the heart of the city, yet built with noble intentions.

Yet only one project was criticized and singled out by two self-proclaimed environmentalists. People wondered why. And they spoke before the city council.

The City Council of Dumaguete has been magnanimous and considerate to this small group of self-proclaimed environmentalists by allowing them to air their concerns and opposition on the ongoing boulevard expansion project of the city in the vicinity of the Dumaguete Press Club, Brgy. 4 Tinago of the city.

The people of Dumaguete were listening and hearing their long threats of alleged violation of environmental laws. The people were expecting to hear a clear explanation of how exactly the boulevard shoreline protection or reclamation project would adversely affect or bring actual damage tot he environment, the city and its people.

Instead, the self-appointed spokesperson of the group identified as Leo Mamicpic, a resident of Bantayan who used to be seen in a few stage shows at the Luce Auditorium at Silliman University as a cultural artist spoke of technicalities instead of its merits or demerits and its adverse effect on the environment. He even lambasted the city mayor for allegedly not complying with the provisions of the ECC.