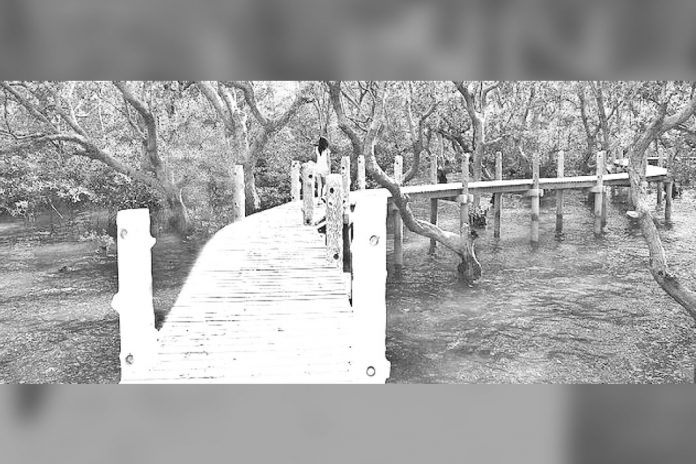 Some 400,000 mangroves “pagatpat” were planted around the board walk in Tanjay City, Negros Oriental and nearby areas in a span of four years, thereby boosting the ever growing eco-tourism potentials of Tanjay City. Soon it will be a major tourist destination.

This was confirmed by Tanjay City Mayor Rey Concepcion.

Popular Volunteer and leader Sydney Lee who along with the rest of the hundred volunteers are targeting one million mangroves to be planted within a ten-year period in support of the 10 million in 10 project of the Energy Development Corporation (EDC). In November this year, they will resume planting 11,000 mangroves in selected areas, Lee added.

Among the organizatrions who contributed to the 400,000 planted mangroves as part of their commitment to achieve a greener Negros include the Friends of Earth headed by Laarni Lee with 60,000 mangroves planted, the 79th Masaligan battalion contributed 10,000 during their stint in the province, Mangroves Sea Grasses Vital Synergy with Mano Saldivar has planted 80,000 mangroves, Cartronix Logistics and Transport Corporation c/o Edward Du with 40,000, Negros Oriental ROTC Association of Corps Commander c/o retired Col Alfred Guath planted 60,000 mangroves, corporate volunteer New Bian Yek Commercial Inc and group of companies headed by Danford Sy contributed 30,000 mangroves, Tanjay City headed by then mayor Lawrence Teves and the present mayor Rey Concepcion with 110,000 mangroves planted, and Salvador del Mundo with 10,000.

These organizations form part of the socalled Allied Mangrove Planting Organizations which targeted the vast mud flats of Barangay San Isidro in Tanjay City. They make it a point that each group can plant 10,000 mangroves in one year. For this year alone, a total of 100,000 mangrove trees were planted on its 4th year.

Locally known as “pagatpat,” “bakhaw baye”, “bakhaw laki”, Lee said the propagules is bought at P1 to P2 each from the surrounding communities as part of their livelihood and most importantly they now help guard the mangroves from firewood gatherers.

According to Lee the volunteers are impressed with innovations implemented in Tanjay City to the effect that applicants for a business permit are required to plant propagules.

“What keeps us going is really for the protection of the environment,” Lee pointed out.

On the tourism side, Lee said people and visitors alike come to the boardwalk to feel the enriched oxygen environment while inside the mangrove plantation with over 100 wild duck residents and hundreds of birds. Droppings of the birds become fertilizer and enriched the soil, hence fish and shellfish are found in the area.