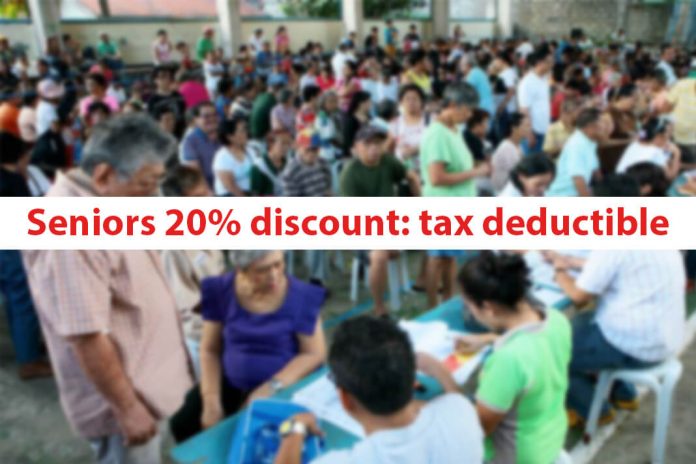 DUMAGUETE CITY – The more drug stores and business establishments give 20% discount to senior citizens, the bigger the tax deductibles are for them.

The officers of the 17,000-strong senior citizens in Dumaguete City took turns in expressing their dismay over the bold and habitual disregard of their rights as provided for under the Republic Act 9994 or the Expanded Senior Citizens Act of 2010.

Under the law, seniors are entitled to 20% discount for goods, services, drugs, fare among others but many establishments in particular pharmacies and stores refuse to grant them the discounts.

Councilor Manuel Arbon proposed that the seniors would rather sue the boticas and other offending stores so that a conviction will serve as a hard lesson and example.

Councilor Karissa Maxino cited a case when a manager of a local cooperative was imprisoned for three years for refusing to grant the 20% discount to a senior for a bottle of softdrink.

However, aside from the legal route, Councilor Agustin Miguel Perdices proposes that seniors should band together along with their families to boycott products and services of pharmacy and stores that are notoriously violating the discount privilege.

Offering a different perspective, Councilor Estanislao Alviola explains that small players like local boticas would lose income should they grant the 20% discount to seniors that may force them to eventually go bankrupt. He stressed that only the big players are capable for granting the discount since they can also ask the pharmaceutical companies to provide subsidies that will offset any potential losses due to the discounts. Nevertheless, the law must be followed, Estanislao, who is also a dealer of medicine, said.

But Maxino pointed out that the boticas or establishment can actually claim tax deductions based on the cost of goods sold or services rendered. Provided that the establishment is religiously paying its tax before the Bureau of Internal Revenue.

Councilor Alan Cordova decried the fact, that the previous administration failed to penalize the boticas and stores that did not grant discounts to seniors despite a report from the then OSCA Head George Villamor, who provided a list of the offending establishments to the office of the Mayor in 2014 but never heard any action or cases filed as a result of the report.

Under the law any person or company who refuses to honor the senior citizen card and grant 20% discount may be imprisoned from 2 to 6 years and shall be fined not less than P50,000 but not exceeding P200,000.