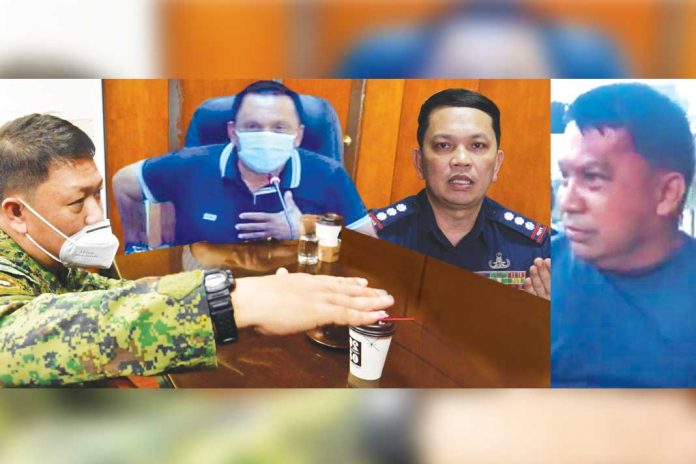 The police escort of Gov Roel Degamo for eight years is not detained by his own comrades against his will, but safely quarantined for Covid requirements in Manila PNP  capital regioin headquarters in time for his new assignment there.

Initially, the escort  was invited to  PNP Cebu and transported to Manila where he was quarantined for Covid requirements. The Police submitted evidence that  Degamo’s  police escort  Master Sergeant Reuel Pinero (right)  was  not detained in Negros or Cebu.

A second Habeas  Corpus case looms asking Manila courts to produce the physical presence of Pinero there.  Trouble begins if Pinero is not in Manila PNP , said counsel Joel Obar. If counsel Oban goes to Manila he will also be quarantined for 14 days.

Police regional office PRO-7 released this  statement following claims from quarantined Master Sergeant  Reuel Pinero’s wife, Nelly, that his husband has been “held against his will.” Nelly’s counsel, Atty. Joel Obar, filled in her behalf, a Writ of Habeas Corpus  Data at the local Regional Trial Court to ask for her husband’s physical and safe return following his “invitation” by regional PNP officials regarding his new assignment.

PRO-7 clarified that Reuel was initially temporarily housed at PC Hills, Barangay Apas, Cebu City, later to  the National Capital Region  after Manila was reverted back to Enhanced Community Quarantine for two weeks. Nelly has earlier said that the Commission on Human Rights inspected PC Hills but her husband was not there, contrary to claims.

PC Hills is a government-owned compound that houses active members of the Philippine National Police, assigned in the city.

To dispel rumors, PRO-7’s statement said, Reuel himself, executed an affidavit clarifying his real condition and whereabouts. “PEMS Pinero voluntarily executed a subscribed affidavit explaining this matter,” the statement reads. “Being under detention connotes that one is under arrest. Such is not the case for PEMS Pinero, who in his own free will chose to avail of the convenient living arrangements in the Manila  PC Hills Quarters.”

In her petition for Habeas Corpus, Nelly alleged that her husband was also asked twice to “sign an affidavit implicating Governor Degamo of the murder  of DYMD  radio commentator , Rex Cornelio.” Nelly claimed that her husband “refused to sign and since then his liberty was effectively restrained as he was denied any contact to anybody.”

However, PRO-7 clarified that Reuel was “treated like any other of his equivalent rank” as an active member of the PNP. “Should her family intend not to continue serving as a member of the PNP, PEMS Pinero can freely choose to tender his resignation,” said the statement, responding to Nelly’s call for her husband’s early retirement.

“PRO-7 shall be conducting a thorough investigation to get to the bottom of these unwarranted and malicious insinuations that Pinero was detained by the PNP ,  and for possible administrative and legal action,” the statement reads.

In a video posted on social media last week, Pinero was seen boarding a helicopter bound for NCR with both of his thumbs held up, while saying, “forward mo sa akin yan ha!” – Ryan Sorote