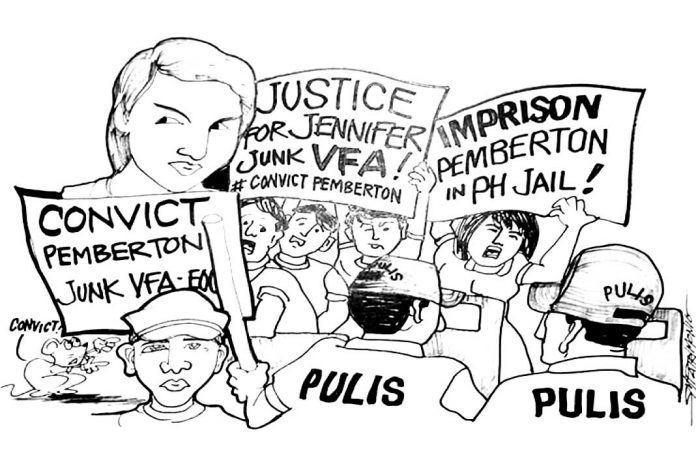 The “celebrated” case of US trooper Pemberton vs. LGBT victim Miss or Mr Laude is much deeper than an ordinary homicide case.

If Pemberton were an ordinary American tourist, the story would not land on the headlines. But because he was a US marine, it made a big political issue, out of a case of an ordinary drunkard vs a prostitute case.

The anti-US buggy which is China is fanning the case as if to explode, that is an opinion. Issue: why favor an American trooper to be released after 5 years when he is sentenced to 10 years for homicide downgraded from murder? The issue is political, more than an LGBT case.

How much more a US soldier, locked in a special solo aircon cell at camp Aguinaldo? That is for the Visiting Forces Agreement to answer. Simple China vs. US political issue.

Issue: no proof of Pemberton’s good conduct behavior because he was solo in a special cell away from Bilibid Prison miles away in main Camp Aguinaldo; no proof of evaluation and recommendation of good conduct by the jail management. Thus the uproar of a premature release.

Solution : show proof of good conduct. But what proof when he was confined solitary in a special jail even away from Bilibid where ordinary criminals are locked up. —but in main camp Aguinaldo, in a special aircon solo room ,— is that a hotel?

Morale: the trouble is that we give special treatment to Americans who in their country even discriminate against black, brown, Asian and non-whites. All our pinoy migrants the U.S. there agree. Pero gahilum ra.

As an ordinary brown Filipino, what would you feel?

THAT: IS THE ISSUE, my friend.