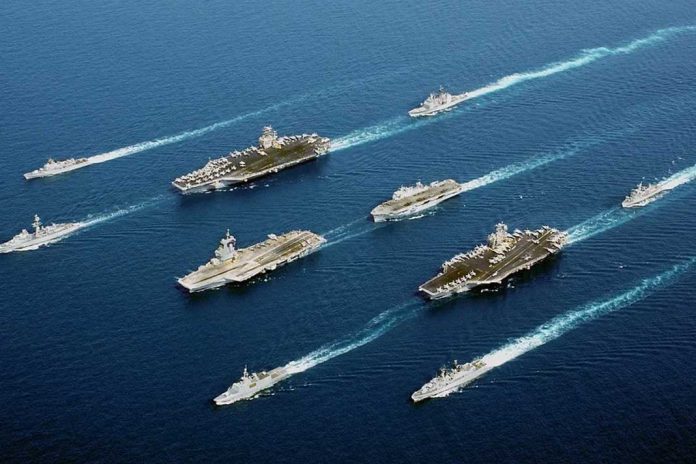 THE SOUTH CHINA SEA AREA is a 3.6 million square kilometer of rich resources, actively claimed by six nations, including the Philippines. This seems to be a new “flashpoint” for a military confrontation between the world’s superpowers USA and China.

Legally, the contention has been between the 2016 decision of the International Arbitration Tribunal in the Hague and China’s leaning on its untenable “nine-dash” theory and the so-called Law of the Sea Convention to define the ownership of a territory.

By now, everyone knows the reasons for this dog fight over a valued piece of bone. Billions of barrels of natural gas and oil, fish and maritime resources (to provide protein for 1.4 billion Chinese) and its strategic role in commercial and military navigation.

In 2018 alone, $5.3 Trillion in commercial trade (30% of the maritime business) pass through the SCS (South China Sea) and the Australian National Centre for Ocean Resources stated that 12% of the total global fish catch happens here. That 55% of the world’s fishing vessels visit SCS means it is not yet an “overfished territory”.  Fishing “incidents” involving China and smaller claimant-nations have been many.

In the last few years, China has employed a “creeping militarization” of the area with patrols and military exercises and setting up three airfields in the reclaimed areas.  In return, the USA and allies Japan and South Korea have been holding their own military exercises in the area, inviting Australia in the process- infuriating China.

Accusing the US of flying a U2 “spy plane” over the disputed area, China last week fired several medium-range missiles into the SCS -condemned by the USA as increasing the “tension” in the area. The US (as well as the Philippines) has – consequentially-banned the purchases of products made by 24 Chinese companies who participated in the “illegal” construction of the reclaimed Chinese islands.

Democrat candidate Joe Biden, if he trounces President Donald Trump in the November polls, is expected to adopt the latter’s “hawkish” position on SCS compared to the accommodating stance of former president Barrack Obama. The impasse will continue.

The question has always been asked: when a real confrontation occurs between the US and China, who the two will blink first?

Perhaps a review of the military might of both nations (2020) is in order.

According to the “US Military Today”, China has a current population of 1.4 billion versus only 329 million for the USA.

China has a slight edge in the manpower department, it seems?

For moving ground weaponized vehicles like combat tanks, armored vehicles, personnel carriers,mine-protected vehicles and light utility vehicles, China has 92,158 and the US has 152,414. The US has an advantage here without qualifying the strength of each moving vehicle-weapon type.

In the air force, the US dominates with total aircraft of 13,564 versus China’s 4,032. Included in this count are fighter aircraft, attack aircraft, trainer aircraft, various helicopter types, strategic bombers, AWACs, tanker aircraft and transport aircraft.

China lords the sea with a total naval fleet of 731 almost double that of the 437 of the US. Among this count are aircraft carriers, destroyers, frigates and corvettes. China also has 76 submarines against the US’s 71.

One can be wrong by assessing the military strength on the basis alone of the conventional weapons of warfare stated above. One can recall that World War II ended when the US bombed Japan’s Nagasaki and Hiroshima with atomic nuclear bombs in 1945. Nuclear power matters.

In this regard, the US has a far superior advantage at 6,186 nuclear weapons against China’s only 280 nukes. Top of the list is Russia with 6,850 nuclear weaponry. But one cannot ignore the fact that among the Top Ten Nuclear powered nations are France (300), UK (215) and Israel with (80) -all acknowledged allies of the Americans. India with (135) has been veering lately towards the US because of the unresolved Sino-Indian border clashes.

North Korea (15) has small artillery but its military strategies border on the insane and therefore dangerous from a geopolitical perspective.

With this kind of weapons employed, one cannot imagine whether our planet can survive another major war without endangering the extinction of mankind – far worse than what Covid-19 can do.